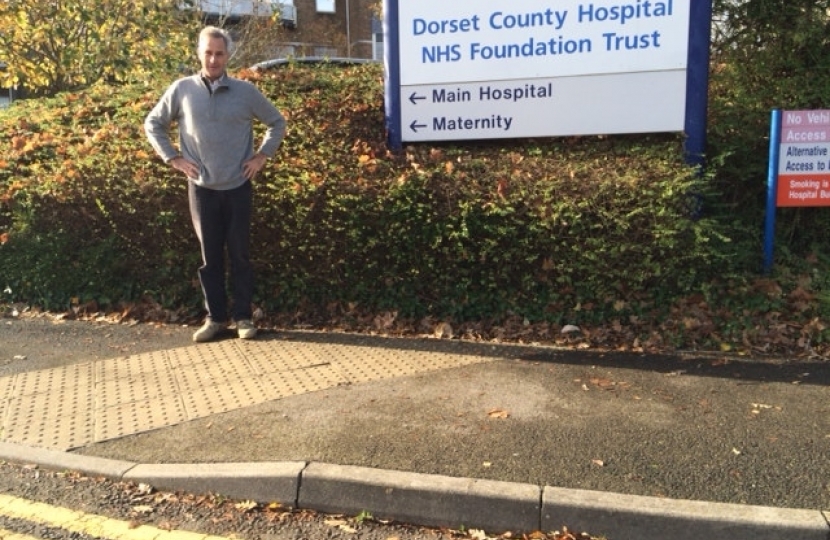 Richard backed a passionate campaign to save Dorset County Hospital's Kingfisher Ward/SCBU by Oliver Letwin MP, local residents, friends and family of current and former patients and the Daily Echo after the unit's future was threatened by proposed changes.

Dorset's Clinical Commissioning Group (CCG) had made it clear that provision of healthcare in Dorset was, "unsustainable in terms of staffing, facilities and finances." Problems included the rural location and long distances to travel, more complex deliveries of more babies, small hospitals with overstretched staff and care organised according to NHS boundaries, rather than need.

On Wednesday, 20 December 2017, Tim Goodson, CCG Chief Officer announced that the Dorset Clinical Commissioning Group (DCCG) intends to maintain a consultant-led maternity and overnight children’s service in Dorchester as part of a single maternity and paediatrics service for Dorset.

Mr Goodson said: ‘We have been in discussions with Somerset CCG around the future possible configuration of maternity and paediatrics services across Dorchester and Yeovil. It is now Somerset CCG’s intention to carry out a full clinical service review similar to that which Dorset has already undertaken and they would wish to include the options for maternity and paediatrics services, including those at Yeovil, as part of that review.

‘We know from our experience that such reviews are complex and take a considerable time to undertake and reach a decision point.

‘We believe that having gone through the review in Dorset and raised a number of concerns around the future sustainability of these services, that we need to give a clear steer on the future of the services. We are taking this step now to give local parents, children and staff a degree of certainty about their future.

‘Dorset CCG’s Governing Body will need to agree a way forward in the new year. Whilst I would not wish to pre-empt any decision, it is our intention to create a single service across Dorset and work to maintain a consultant-led maternity service and overnight paediatrics service in Dorchester, as well as at the major emergency hospital.

‘If a sustainable model can be found then we will consult with the public on these proposals before making any decision. We will remain open to Yeovil Hospital joining part or all of their service with Dorset in the future should that be the outcome of Somerset’s review.’

The Governing Body of NHS Dorset Clinical Commissioning Group considered a number of wide ranging options after a public consultation between December 2016 and February 2017, which saw over 18,500 people give their views.

Before making final decisions, the Governing Body considered recommendations and feedback from clinicians, the public and local organisations.

The decisions will see significant investment in maternity services, including a new maternity unit at Bournemouth.

History of the campaign

Between October and December 2015, five Royal Colleges (Paediatricians and Child Health, Obstetricians and Gynaecologists, Anaesthetists, Midwives and Nursing) were invited to review the CCG's recommendations for childrens' medical services in Dorset.

They recommended that hospital care for children in Dorset was reorganised along the following lines:

Final decisions on the future of Kingfisher Ward and all paediatric care in west Dorset will be made when Dorchester and Yeovil hospitals have come to a mutually agreed decision.

Dorset's Clinical Commissioning Group (CCG) held a Dorset-wide consultation, which closed on February 28, 2017, on proposals for changing the way overall local community and hospital based services in the country are organised.

The CCG made it clear that provision of healthcare in Dorset is, "unsustainable in terms of staffing, facilities and finances." Problems include the rural location and long distances to travel, more complex deliveries of more babies, small hospitals with overstretched staff and care organised according to NHS boundaries, rather than need.

The decision to create a single maternity and paediatrics service for Dorset was made by the CCG’s Governing Body in September 2017 after the conclusion of the Clinical Services Review public consultation.

The Governing Body also agreed to ‘seek to commission the delivery of consultant-led maternity services integrated across Dorset County Hospital and Yeovil District Hospital for the Dorset population’.