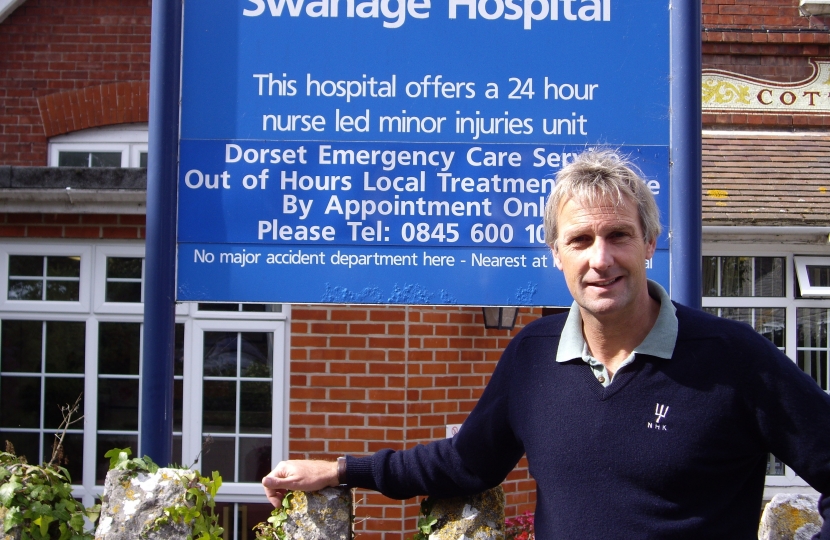 So says Ron Shields, the chief executive of Dorset Healthcare University Trust, whose responsibilies include the three community hospitals in South Dorset. The other two being Weymouth and Portland.

He told Richard that he wanted to fully utilize all the community hospitals and integrate them into his healthcare programme.

This is wonderful news for all Swanage residents and of course for the Friends of the hospital, so ably led by Jan Turnbull.

She and her colleagues have fought an intelligent campaign, convincing Mr Shields that the loss of the hospital would be detrimental to care provision in the area.

Richard played his part in the campaign to save the hospital.

In a debate brought by my colleague Dr Sarah Woolaston, and signed by Richard, in 2012 the House of Commons overwhelmingly supported the contribution of the 320 community hospitals in this country.

A series of health ministers assured MPs that they were a “vital resource," the key to the future provision of health care and would provide “rehabilitation, recuperation and respite” in a local setting, resulting in a “rapid return to independence and good health.”

Isolated at the far end of the Isle of Purbeck, Swanage Hospital cares for 30,000 people, all drawn from the local, rural area. It provides 15 inpatient beds for those discharged from the major acute hospitals 20 miles away at Dorchester and Poole and is particularly noted for post acute care for stroke victims before they go home.

Twenty one consultants visit weekly, some performing minor and intermediate surgery in its operating theatre and a GP attends daily. In addition, Swanage Hospital provides a 24-hour minor injuries unit.

The Hospital has served Swanage since 1890, becoming part of the NHS in 1948. It is so highly thought of that the Friends of Swanage Hospital have raised £1.4m, all of which will be reinvested in the hospital. The Friends’ plans for the future include expansion of services – the hospital is busy and could be even busier.

Consultants at Poole and Dorchester have supported these ideas and there is room on the hospital site for an expanded GP medical centre, which is urgently needed.

Current NHS policy is committed to “improving discharges from acute hospitals and increasing access to care and treatment in the community.”

The Health and Social Care Act, 2012, devolves more power to local communities by giving Clinical Commissioning Groups responsibility for organising local health care. However, the Minister for Health said: “Any changes to services must have support from Clinical Commissioning Groups, patients and the public, be based on sound clinical evidence and support patient choice.”