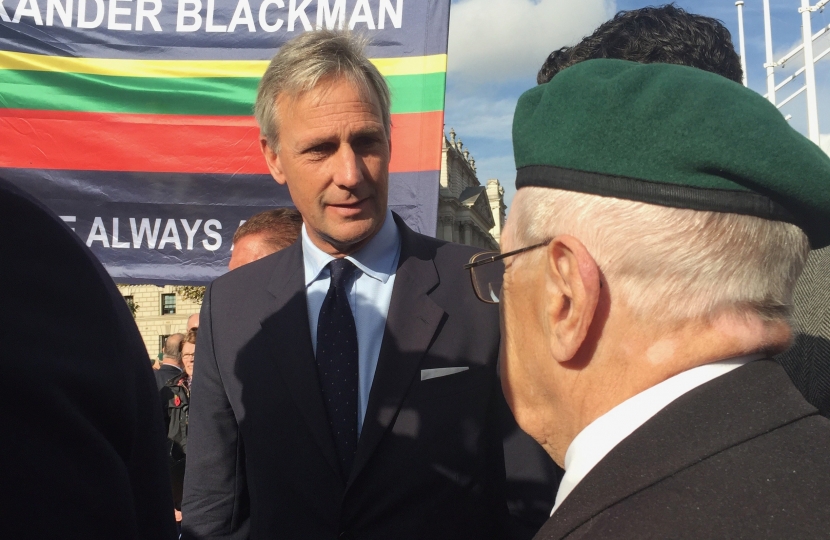 Richard has long supported the campaign to end repeated and vexatious claims made against British service personnel, primarily after overseas operations.

The incoming Government promised to tackle these claims within its first hundred days and kept its word, bringing the Bill before Parliament on March 18, 2020.

The Bill, currently before Parliament (September 2020) for its second and successive readings, will ensure that those who uphold the highest standards in the heat of battle are given essential, legal protections. The Overseas Operations (Service Personnel and Veterans) Bill ensures that only in exceptional cases will serving soldiers or veterans face prosecution for alleged offences committed outside the UK more than five years ago, and cases will not be allowed to roll on for years. Service personnel who commit crimes or flout the Geneva Convention will still feel the full force of the law.

The Bill will also make it simpler for service personnel to bring civil claims against the MOD for personal injuries, death and claims under the Human Rights Act, so long as claims are brought within six years of the point of knowledge of an injury.

Richard believes that this is an overdue acknowledgement of the debt we owe our brave Armed Forces, who are still the best in the world. With the passage of this Bill, he believes they will no longer be sent into harm's way on our behalf without the assurance that they, in turn, will be protected.

The Bill does not apply to 'legacy' cases from the Northern Irish 'Troubles,' which will receive separate legislation under a similar process.

The main points of the Bill arise from a consultation launched in July 2019 by the Secretary of State for Defence, which were all accepted by the MOD, which recommended a five-year limit on prosecution for historical offences.

The barrage of 'lawfare,' was mainly pursued by unscrupulous lawyers who trawled for potential clients across former battlefields, abusing human rights legislation to fatten their wallets.

Over 4,000 allegations of torture, murder and other abuses were made against British soldiers in Iraq and Afghanistan after 2003. There were five main inquiries, as follows:

From the start, Richard supported the campaign for a statute of limitations to protect military veterans facing investigations into war-related fatalities. Recent calls (June 2018) focused on veterans of the Northern Irish troubles in particular, but Richard has long been concerned about the treatment meted out to, for example, Iraq war veterans, many of whom faced repeated and vexatious claims brought by disreputable law firms.

On June 12, 2018, the Parliamentary Defence Select Committee renewed its calls for a Statute of Limitations and launched a fresh inquiry on protecting personnel engaged in all conflicts.

The Committee repeated the call, made in its 2017 report Investigations into fatalities in Northern Ireland involving British military personnel, in its official submission to the Northern Ireland Office’s legacy consultation.

In a letter accompanying the 2017 report, sent on June 12 to the Rt Hon Karen Bradley MP, and the Prime Minister, the Chairman of the Committee, the Rt Hon Dr Julian Lewis MP, reiterated the Committee’s unanimous view that the best solution to the “vicious cycle of investigation and re-investigation” was a Statute of Limitations covering all Troubles-related incidents, up to the signing of the 1998 Belfast Agreement, which involved former members of the Armed Forces, accompanied with a truth recovery mechanism.

The letter also expresses the Committee’s disappointment and surprise that the legacy consultation failed to include the section on alternative approaches to the past, including a description of the Committee’s recommendation, that Members had been led to expect following the Government’s official response to the Committee’s 2017 report.

As a result of this failure, and in light of the serious and growing concerns of another IHAT debacle, the Committee has today also launched a fresh investigation into the question of how former service personnel can be protected from the spectre of investigation and re-investigation for events that happened many years, and often decades, earlier.

MPs, many of them armed forces veterans or reserves themselves, have asked questions in the House and an upcoming debate will cover the subject. In addition, the inquiry will be open for submissions until the end of July 2018.