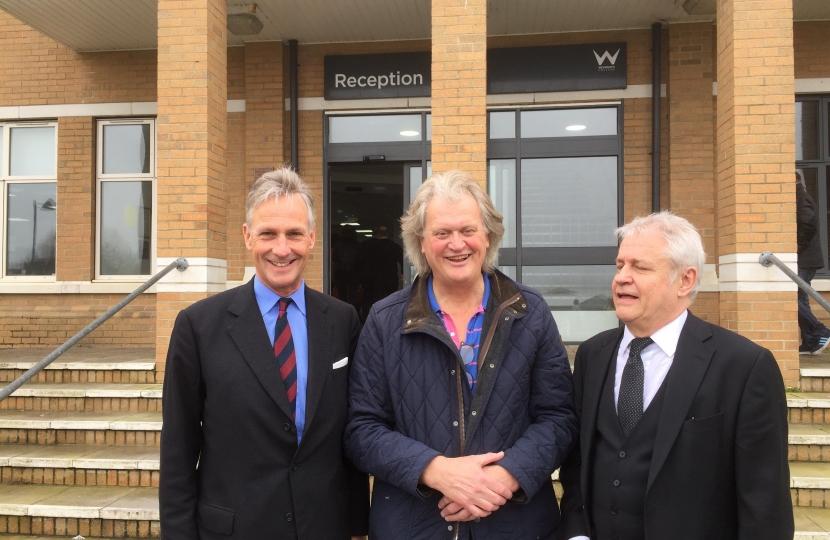 Richard is strongly backing Weymouth College's bid for £20 million to establish a new, engineering department. As the sole provider of college education in the constituency, the College is vital to the future hopes of many of South Dorset's young people.

The College attracted new capital funding allocation of £421,000 in September 2020. The money, announced by the Department for Education, is intended to be spent on improving and upgrading the fabric and condition of the College.

“This is excellent news, both for Weymouth College and Dorset as a whole,” says Drax. “The College provides outstanding education and apprenticeships for those who do not see University as the sole route to a fulfilling career.”

“I have long supported Weymouth College and I share College Principal Nigel Evan’s delight at this news. It is a timely, and well-deserved grant which reflects the hard work which has gone into making the College the success that it is.”

The announcement follows up on the Prime Minister’s promise in June that an initial £200 million of the £1.5 billion to be spent on transforming further education colleges over the next five years, would be made available immediately.

The aim is to boost further education colleges in England as the country emerges from the pandemic, and to upgrade the condition of college estates across the land.

As an enduring advocate for apprenticeships, Richard originally teamed up with the College to create the first Apprenticeship Fair in 2014.

The one-day event, combining local businesses, students and an inspirational speaker, has now evolved into an annual Apprenticeship Week and the College now attracts over 500 apprentices every year.

The week of activities was bought to a close on Friday, February 7, when employers, assessors, family and friends joined Weymouth College apprentices for the College’s annual Apprentice of the Year Awards

Mark Cribb gave an inspirational talk highlighting the stages of a successful career and sharing some great stories from his life and business adventure to date.

The final award of the morning – the Weymouth College Apprentice of the Year 2020 – was presented to apprentice stonemason Josh Harvey by Richard Drax MP.

At an earlier Apprenticeship Week event in 2017, Richard spoke about increased government support for apprenticeships and encouraged businesses present to get involved.

“We’re not telling businesses what to do but we are helping them to do it,” he said. “There are massive opportunities ahead and our young people are essential to our success.”

At that apprentice awards following the breakfast, the keynote speaker was Tim Martin, Founder/Chairman of the Wetherspoons empire, who said that, after studying for a law degree, he effectively took a three year apprenticeship in pubs, “making all the mistakes going and plenty more.”

“If you’re good at the academic side, it’s great but it’s overemphasised in our society,” he added, telling students that his best advice was to “keep working.”