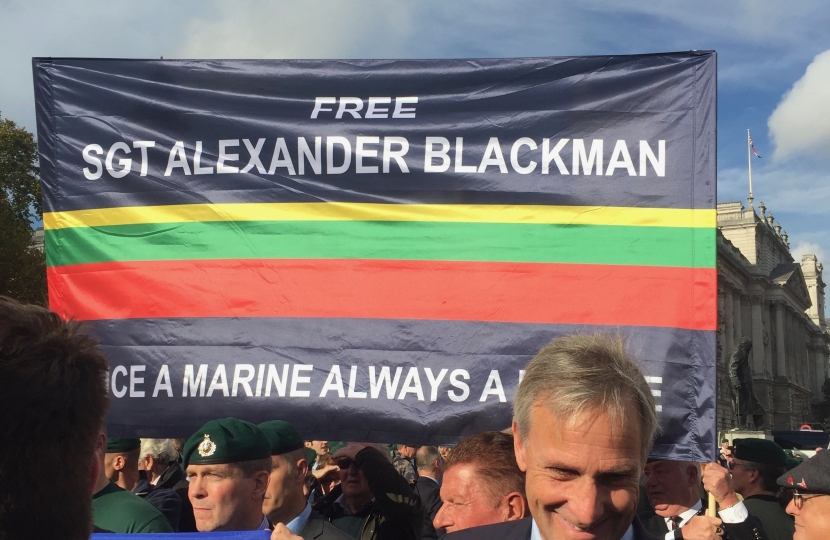 To the delight of his supporters, Alexander Blackman was released from HMP Erlstoke in the early hours of Friday, 28th April, 2017. He is now at home with his wife, Claire, who fought so bravely for his return.

It was a significant victory for his team, including Richard, who visited Mr Blackman several times in prison and worked ceaselessly to have his sentence for murder reviewed.

QC Jonathan Goldberg, who had been told the case was hopeless, has described winning it as, "the crown of my career."

After five judges overturned the court martial's murder verdict on March 14, they sentenced Alexander Blackman to seven years' imprisonment for manslaughter by reason of diminished responsibility on March 28. The sentencing was delayed because the judges wished to consider new material, including a plea from Jonathan Goldberg QC, that the former Royal Marine should no longer be dismissed in disgrace.

The new sentence meant that Sergeant Blackman was released from prison as he had served almost three and a half years in jail. The judges also agreed with Mr Goldberg, 'that there should be no question of dismissal with disgrace.'

History of the case:

Richard championed the case of Sergeant Alexander Blackman, the former Royal Marine imprisoned for shooting and killing a wounded Taliban fighter in 2011, for several years. The case was controversial - Sergeant Blackman was filmed in the act - but campaigners maintain that the senior non-commissioned officer was operating under intolerable pressure in impossible conditions, without adequate support.

In January 2016, the Criminal Cases Review Board confirmed that they would be reviewing Alexander Blackman's case as a priority after 1,100 pages of new evidence were handed in by his new legal team. The team, headed by Jonathan Goldberg QC, said that he was never given the option of pleading manslaughter due to diminished responsibility.

In December 2016, the CCRC concluded there was a “real possibility” of overturning Blackman’s conviction, and granted an appeal.

Later the same month, the Lord Chief Justice refused a bid to grant Alexander Blackman bail, after prosecutors challenge new psychiatric evidence about his mental state at the time of the killing.

The appeal was expedited and scheduled for late January, 2017.

The CCRC also concluded on January 10, 2017, that the Judge Advocate general who presided over Blackman's original court martial was guilty of an 'apparent failure' to apply the law properly, raising hopes that the murder conviction could be quashed.

Blackman’s former commanding officer, Colonel Oliver Lee, revealed in December that he had warned senior officers about the behaviour of the former marine’s unit.

Colonel Lee, who resigned his post over what he called an “extremely bizarre” decision to prevent him from giving evidence at Blackman’s  original court martial, said the unit was operating in “extremely challenging” circumstances which required “very strong leadership” to enable “exceptionally disciplined soldiering”.

Members of Blackman’s squad also came forward to defend the Marine, who was stripped of his rank and discharged in disgrace at the court martial, where he was sentenced to 10 years, later reduced to eight on appeal.

Drax called an adjournment debate on Sergeant Blackman's case in the House of Commons on September 16th,  2016, at which a number of MPs, many of them former servicemen, spoke passionately. The aim of the debate was to support the case for a review of Blackman's sentence.

Two, huge, Westminster demonstrations of current and former servicemen were held in support of Alexander Blackman in 2015 and 2016. Many of those assembled were Royal Marines and many were defying a Ministry of Defence ban and warnings of disciplinary action for their support of their comrade. In their midst was Alexander Blackman’s wife, Claire, who had fought for her husband's freedom since his incarceration.

Richard Drax, a former Coldstream Guard, has been a stalwart supporter of Blackman since he visited the former Royal Marine in Lincoln prison in December 2014. “This was no cold blooded killer,“ he has said, “rather, a proud, professional soldier, alongside whom it would be an honour to serve.”

Along with Drax, the author Frederick Forsyth and the Daily Mail, which raised £800,000 for the defence, mounted a fierce campaign demanding a review of Blackman’s sentence.

“It is our duty stand up for our Service personnel,” says Richard. “After all, we send them to war so easily and expect so much of them. War is a dirty business and every man has his breaking point, even the best.”