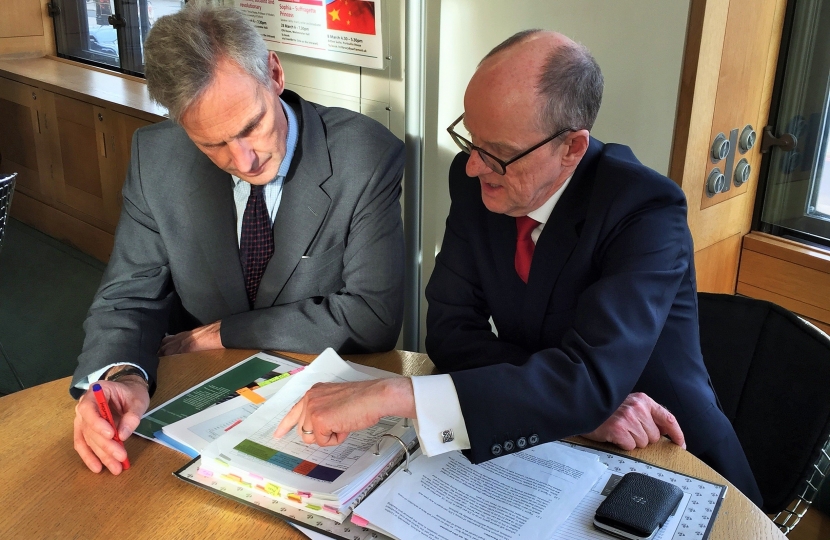 Richard has fought with the F40 campaign group of lower-funded councils for a levelling up of South Dorset's schools’ funding since he was first elected in 2010. That has been achieved. But he believes more fairness is needed in the funding formula, particularly when it comes to special educational needs and disability, which remain underfunded in Dorset.

A new, much-needed special school on Portland is planned and he looks forward to that being finally confirmed.

Weymouth College has had more funding, which is to be welcomed. But further education needs more investment, especially as the College is the only place where many young people can aspire to go on to university or careers. The campaign for further investment continues.

As a member of the F40 group, Richard long backed the fairer schools funding campaign, which aimed to end the inequity whereby inner city schoolchildren were allotted almost twice the amount per capita as rural children. The F40 group represents the lowest funded local authorities in England.

Dorset students were historically particularly hard hit. In 2016, Dorset was allotted £4,908 per child compared with, for example, £8,256 in Tower Hamlets.

F40 has been campaigning for a fairer allocation of funding for schools for over two decades. Richard was one of 111 MPs who signed a letter to the Prime Minister in October 2015, demanding a change to the system.

In July 2017, he welcomed the introduction of the National Funding Formula and commended the government for honouring its manifesto commitment to provide fairer funding for all children in state-funded schools in England. In essence, it meant an increase in basic funding for Dorset schoolchildren of 3 per cent. The intention was to ensure that similar children with similar needs were treated fairly, no matter where they live.

Richard has continued to press for extra funding for special needs.

This week, he and other F40 members wrote to their local schools with fundamental concerns about the new formula and there is unanimous recognition that there is still more work to do to tackle continuing unfairness of funding allocation and inequalities. Therefore, F40 will be campaigning for:

•  A significant increase in the amount invested in education funding to meet the cost-pressures facing all schools (F40 is awaiting access to Department of Education datasets in order to be able to calculate the shortfall).

•  An index-linked activity led formula which can be used for ensuring sufficient funding in the system and to define what the proportion for additional educational needs should be and can be used to support policy changes in the system to enable schools to meet post-Brexit needs.

•  One National Funding Formula (NFF) without the need for Minimum Funding Levels (MFL) and long-term locked in protections. If the MFL is to stay, then it should take account of the additional educational needs (AEN) of schools and be fairly applied to support the different levels of AEN.

•  The setting out of plans for the funding formula from 2020 onwards. Schools need to know whether there will be sufficient funding in the education budget to achieve the aims of the formula and when the government will move to a system of direct funding to schools rather than via local authorities.

•  The establishment of rolling three to four-year budget settlements for schools which are inflation-proofed and include funding for cost-of-living increases.

•  Appropriate quantum of funding for the high needs block (which should be index-linked). This needs to take into account the increasing demands of higher needs as medicine continues to advance. It also needs to retrospectively support the increase in post-19 demand for education.

•  An increase in capital funding to meet the additional demand for local specialist places at an affordable price.

•  Promotion of inclusive behaviours in schools, to stop schools passing a problem on.  This would include national support for making cultural change, with new legislation where necessary.

•  A review of the early years national formula to make it fit for future use.

•  Appropriate quantum of funding for early years providers to take account of the pressures of the living wage and the impact of 30 hours.

•  Clarity on the way that the block will work and be increased in future.